This text is part of the document: (EN) “Concept Cars as a design-led futures technique” (http://jrms.pktweb.com/?p=3583).

The first Concept Car was the Buick Y-Job, designed in 1938 by Harley Earl. It represented an important milestone for General Motors. According to Edsall (2003), it turned the company from an engineering-oriented organization into a design-led one. He claims that the Y-Job represented the first time a designer took the lead in the design of a car, establishing an entirely new way of working within General Motors. As a result, the Styling Section of GM made a fully working prototype built on a production Buick chassis (shown in Figure 3). It was defined as “the first car built by a mass manufacturer for the sole purpose of determining the public’s reaction to the new ideas”, and it was not intended for production. Times have changed since then and the role of Concept Cars has broadened considerably.

The benefits Concept Cars offer, when it comes to innovation, are linked to the outcome as an “experimental artifact” (Styhre, Backman & Börjesson, 2005) but no clear guidelines or details are proposed . Santamala (2006), Backman and Börjesson (2006), Evans (2011), and Lv and Lu (2012) propose that these artifacts stimulate imagination, define new creative limits, and break boundaries regarding product design.

On branding, the literature is more prolific, but it does not identify clear differences between communication for innovation and communication for branding. According to Roscam Abbing (2010), Concept Cars visualize future directions affecting the company from inside and outside. Within the company, Concept Cars create brand identity, and outside, they enhance the brand image of the products . According to Backman and Börjesson (2006), one of the main aims of a Concept Car is to present and visualize the company’s “visions of future design and technology trends”. Internally, this visualization of the future creates guidelines for different functions within the organization, and externally, the vision is communicated. However, Evans (2011) suggests that Concept Cars incorporate trend reports, increasing an organization’s trend knowledge and their consumer foresight, establishing coherent and unified design outputs of the different ideas and products lines.

In regards to the process, Concept Cars are developed as R&D projects, through a series of techniques explored in our previous research. According to Styhre, Backman and Börjesson (2005), Concept Cars offer a “freedom to experiment without being too constrained by existing platforms, regulations or industry standards”. These projects serve as a laboratory for new product development, stimulating experimental thinking and allowing a more freely creative exercise than a typical development project (Backman & Börjesson, 2006). Chris Bangle, former BMW’s head of design, says that GINA (a BMW Concept Car) allowed his team to “challenge existing principles and conventional processes opening possibilities to be more creative” (Squatriglia, 2008). The process of building a Concept Car is also much shorter. Berlitz and Huhn (2005), Styhre, Backman, and Börjesson (2005), and Backman and Börjesson (2006) all claim that the design and development process of a Concept Car varies from six to fifteen months. This in contrast to the development of a production car which can take up to 60 months. The average of ten months to develop a Concept Car includes a final step related to communication, in which the company presents the Concept Car at a motor show to the media: newspapers, TV, and radio (Lv & Lu, 2012), experts and customers (Berlitz & Huhn, 2005), and the general public. 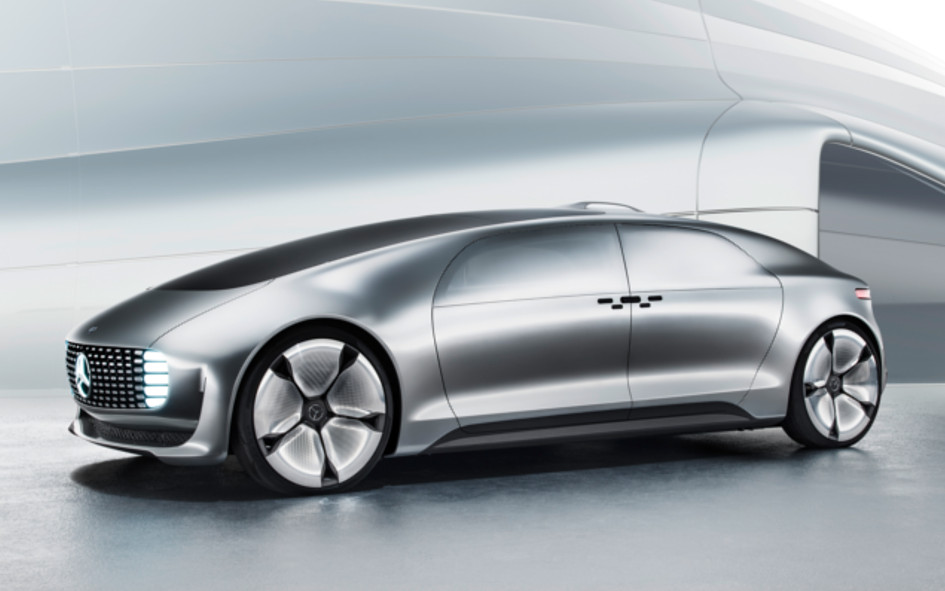 Mercedes-AMG, part of Daimler AG, is a brand used for luxury products. It has a specific portfolio of Research Vehicles with a total of 24 Concept Cars from 1993 to 2012, the brand launched 18 (75%) as production vehicles after one and a half year in average.

The main purpose of the F015 is to state, as a branding exercise, that the company is exploring and innovating about autonomous-drive cars. The F015 is a self-driving luxury saloon car with a sleek futuristic appearance.

It is a vehicle “fifteen years ahead of current developments” that “is is growing beyond its role as a mere means of transport and will ultimately become a mobile living space”. According to the head of Mercedes-Benz Cars, the F015 represents “an exclusive cocoon on wheels that enable people to do what they want to do”.

The F015 was presented and subject to a test drive, in the CES (International Consumer Electronics Show) in 2015 as a fully operational -research- car. The fully working prototype was supported by a press release, a comprehensive set of images, videos and texts.